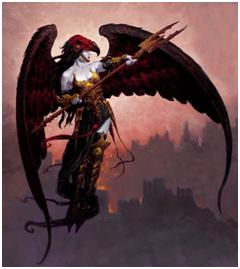 Long ago, before time began for the Inner Realms, there was Kaos. Kaos is a chaotic god, taking physical form many times to wreak havoc. Jealous of the Love his Creator, Draconai had for his A’isha, he plots to destroy them in any way he can.

First, he spreads a rumor in the Havens that their Creators think nothing of their minor God Creations. Draconai’s brother-creator Brakkon stands up for them, but not even he can stop Kaos once his plan takes form. The three Pillars: Draconai, A’isha and Brakkon are Realmbound by their Creations, separating them. Kaos is pleased, for the moment.

He is livid to learn the Lovers found each other once again, in the forms of Dragons in the Dragon Nations, which was built around the Fifth Pillar Ishanar. Once overhearing Draconai’s darkness builds within his relambound form, Kaos has another plan: use it against him. In a dream one night, Kaos takes Draconai’s mind and body, thus starting his realmbound revenge.

Soon, he Makes his own chaos in Brakkon’s mind, naming him Thorn, Draconis’ mind as Kaos, Drakkar’s mind as Scar, and even in A’isha’s Realmbound mind, naming her Destria. Kaos has his hand in more than just one Realmbound Ancient, seeking destruction, not only of the Lovers but the entire Inner Realms.

This is the story of a certain God named Kaos, his life, destruction by Draconai and resurrection by the Trickster Goddess, Sai’brenn’a. From the Havens to The Inner Realms to The Oblivion and back; Kaos is one God that will never Die.

I am the One of Many Names, Many Faces, in Many Realms and Many Times. I am the Creatrix Pillar of Light-named-Ai'sha.
View all posts by Lady Adellandra »

Posted on 22May2010, in When Chaos Runs Rampant. Bookmark the permalink. Leave a comment.